If you ever want to test the patience of someone from the southwest United States, there is an easy, universally despised way. Just slip the phrase, “it’s a dry heat,” into conversation. Ovens are a dry heat and saunas are a humid heat. Which would you prefer to spend time in?

According to the 2017 Homeless Death Report, compiled by the Clark County coroner, one-hundred and eighty-nine people that were identified as homeless, died in 2017. Out of that total, sixty-two of those people died due to heat-exposure.

Reread that. Let it sink in. Sixty-two homeless people died because of heat-exposure, last year. Approximately one-third of the amount of homeless deaths that were experienced in Las Vegas last year, were the result of the weather. In a city that doesn’t experience much in the way of natural disasters, it doesn’t seem like the weather should be able to kill us but here we are, held hostage by the sun.

According to the National Oceanic and Atmospheric Administration, as of 2016, Nevada has the highest death toll of any U.S. state for heat-related deaths for four years running and we’ve seen a spike in deaths since then.

In an effort to more deeply understand the plight of my friends living on the street, I participated in a unity fast last week. For one day, I fasted per the Ramadan rules. Those rules are much stricter than the Catholic fasting and abstinence rules that I’m used to. I can easily afford to skip a few meals but spending a summer day in Las Vegas without water was no picnic. I had to lie down during my kids’ nap and by the time the sun went down at 8:00pm, I felt lethargic and dizzy. The next day I had a dehydration headache no matter how much water I consumed and believe me, I drank a lot of water the next several days.

Still, it was a blessing.

I got to take a tiny peek at the symptoms that people who suffer from dehydration experience. I spent my whole day in the air conditioning. I didn’t have severe sunburns, which are common among the homeless during the summer. I didn’t have heat exhaustion from relentless exposure to triple digit temperatures and I only went about a day without food and thirteen hours without fluids.

The city has cooling stations that are opened during the summer months and additional locations that open during extreme heat advisories.  I print the information off the city website and pass it out to everyone I see that is without shelter from the heat.  Sadly, there aren’t enough cooling stations to hold all the homeless in Las Vegas and those that are living on the street aren’t always capable of traveling to them. 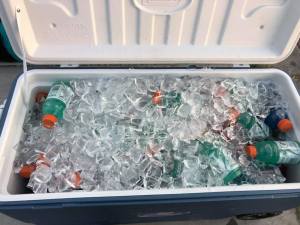 Many of our volunteers aren’t able to come to G Street to serve in extreme heat and others travel for vacation so every able bodied volunteer is more important during the summer months. It’s by far the most difficult time of the year to meet the needs of those that rely on us.  Luckily, those that aren’t able to serve can contribute in other ways. Last year, a friend of mine donated a big, pull-along cooler that I dubbed “the Hydration Station.” Isn’t it beautiful?

If a few hours without water made me “hangry,” imagine how pleased someone who spends 24/7 in the heat is when they get a cold bottle of gatorade and a smile.

I am married to a handsome, wonderful man that embraces my particular shade of crazy. We have three beautiful, maniacal children and they are going to get me canonized one day. We own a house in Las Vegas' Ward five so that we can vote on issues that affect the people I serve. It is full of feral children, pets, half-completed household projects, broken crayons, goldfish crackers, toys, paperback novels, visiting family members, and love. I love every sticky, noisy, messy inch of this place and all the mischievous creatures that live here. I am a fiercely proud Nevadan. There is a very real problem with food insecurity in Las Vegas and my mission is to nourish as many of those in-need as I can. This is my city and these are my people. View all posts by Katie Krikorian